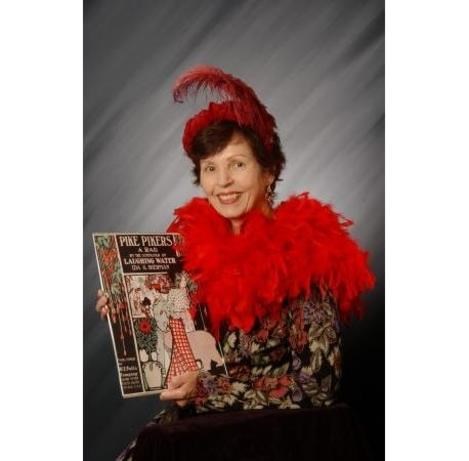 Nora was born on February 27, 1932, in Clay Center, Kansas to Andrew and Nora Carlson. Her older half-brother, Leroy, predeceased her.

Nora's first love was music. She began playing piano by ear at the age of 3. At age 4, her mother--a graduate of Chicago's American Conservatory of Music in the 1900s--began formally teaching her piano, then taught her pipe organ and violin. She soon became an in-demand piano/organ accompanist and piano instructor. After listening to Hit Parade on Saturday night radio in high school, she began playing Boogie Woogie for her friends in high school--against her mother's wishes.

A lifetime of juggling jazz and classical music followed. During early adulthood, Nora played ragtime music in Cripple Creek, Colorado, then studied at the Interlochen National Music Camp in Michigan, the Kansas City Conservatory of Music, and K-State University. She later earned a Bachelor of Science in music education in 1973, a master's in music performance in 1976, a master's in pipe organ performance in 1979, and a Doctorate in Music Curriculum and Education in 1988.

By the end of her career, Nora was a retired music professor, performer, writer, researcher, and expert in female ragtime composers. She produced five CD's and companion music folios of womens rag, performed at ragtime festivals across the country, did ragtime lecture recitals, co-authored an annotated ragtime lexicon, and earned countless awards and certificates, including the prestigious Scott Joplin Award for her extraordinary contribution to ragtime music at the Scott Joplin International Ragtime Festival in Sedalia, Missouri.

After moving to Columbia, Missouri in 1966, Nora met her husband Mark while playing music at Shakey's Pizza Parlor. They quickly fell in love, and married the following year. While in Columbia, they performed for 15 years on "Pepper and Friends," a live talk show broadcast on KOMU-TV. For years, their duo, Ragtime Razzmataaz, performed at ragtime societies and jazz banjo festivals all over the country.

Nora and Mark moved to Lawrence, Kansas in 2006 to be closer to family. In the following years, they spent every Thursday evening playing in the Junkyard Jazz band at the American Legion with many close friends and their daughter, Sue Nanninga, who contributed vocals and played ukulele. They continued to live full, busy lives together until Mark passed in 2017.

Published by Lawrence Journal-World on Jul. 26, 2020.
To plant trees in memory, please visit the Sympathy Store.
MEMORIAL EVENTS
To offer your sympathy during this difficult time, you can now have memorial trees planted in a National Forest in memory of your loved one.
Funeral services provided by:
Rumsey-Yost Funeral Home & Crematory
MAKE A DONATION
MEMORIES & CONDOLENCES
2 Entries
Nora and I grew up together from grade school on and remained close friends nearly all of our lives. She was very dear to me! A very big part of my life. She was rightfully very proud of her children and had a very deep love for them and the wonderful man she married. She had a marvelous musical life granted through her great talent on organ and piano.
She once told me all the theory, chords were already in her head but did not know their names. In Europe her group was asked to create a Bach like composition above a figured bass they were given. She was the only one who could it. One of her thrills in life was being granted the gift of playing many very old organs in Europe and one Bach was said to have played. Not all of her years were easy but all her friends from early years on were delighted and so proud of her well deservedly recognised amazingly talented musical abilities. The loves of her life were her husband Mark and her children. Every honor and fine friends and fine family she well deserved in a way only those who grew up with her can understand.

WIshing many blessings through life for her children,

Wishing all her children fine lives,