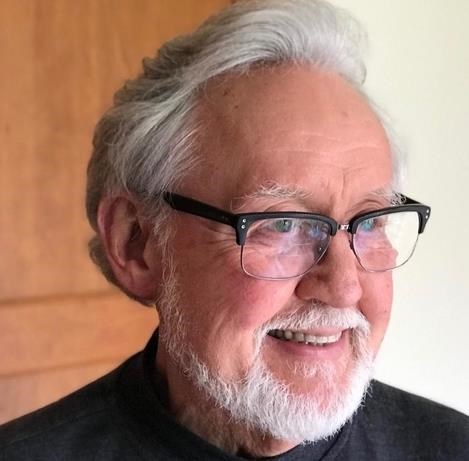 Richard Lee Branham, Professor Emeritus of Interaction Design at KU, passed peacefully February 19, 2020, after a short battle with a rare, aggressive cancer. He spent his last full day visiting with former students and close friends, the epitome of grace and dignity. Known for his empathy, generosity, intellectual vigor and enthusiasm, he will be missed by a wide circle of friends in Lawrence, across the U.S., and around the world.

Richard Branham was born July 25, 1940 in Neosho, MO, the eldest son of Lester Henry Branham and Marguerite Louise (Blinn) Branham. He spent 50 years researching his genealogy, tracing his English roots back to the 1500's in Yorkshire, England (Bramham Park) and his Blinn roots back to French Hugenots and several ancestors who fought in the Revolutionary War. He loved history and culture; genealogy allowed him to study both. With his wife Alisa, Richard taught genealogy classes the past four years at the Watkins Museum in Lawrence.

Always learning, always a teacher, Richard was curious about the world and grabbed every opportunity to gain and share knowledge. He held a BFA and MFA from The University of Kansas, as well as a MS from the Illinois Institute of Design in Chicago. He had a significant professional career and continued to be a design consultant throughout his 44-year tenure at KU. He continued to work with doctoral students after his retirement in 2017 at the age of 76. He was a dynamic and dedicated teacher.

In Chicago, he founded the Information and Design Systems Division of Unimark International, one of the largest design firms in the world in the 1960s. Following that, he founded Design Planning Group. He was a pioneer in design systems, human-centered interaction design and large-scale wayfinding projects (Sears Tower, Chicago; Kingdom Tower in Saudi Arabia; St. Luke's Health Systems) and branding projects (Ford; JC Penney; Target) and small scale wayfinding-navigation and interaction for mobile information appliances (Tatung Corp., Taiwan). He published, lectured and consulted in the Americas, Europe, Africa, Asia and Australia. He was interested in the way people use interactive devices to create meaning in their lives and to navigate in the physical and virtual world.

A charismatic and truly cross-disciplinary professor, he worked with students in Education, Architecture, Communications, and Psychology, in addition to Design. He was the principal advisor to 80+ graduate students and maintained close relationships with hundreds of KU graduates. His mantra "design is design is design" expressed his broad academic interests and expansive worldview. In October 2016, 65 of Richard's former students traveled from across the U.S. for a retirement party at his home, celebrating his influence on their professional and personal lives. He was so proud of his students.

Active in Boy Scouts for three decades, Richard served as Cubmaster, Troop Scoutmaster and District Commissioner. He emphasized a boy-led troop and was a strong supporter of high adventure programs. He spent several summers at Philmont Scout Ranch in New Mexico, leading high adventure treks and training adults in the backcountry. Richard followed the Boy Scout Oath and Law; he was especially kind and brave.

Richard was cremated with his most cherished object: a small water buffalo shaped of mud, given to him by a young boy in Africa about 50 years ago – a symbol of generosity, youth, nature and international culture. His ashes will be interred at Pioneer Cemetery on the KU campus. A joyous celebration of Richard's life is being planned for late spring or early summer. The family requests no flowers but encourages you to make a donation to the Watkins Museum or the progressive organization of your choice.
Published by Lawrence Journal-World on Feb. 23, 2020.
To plant trees in memory, please visit the Sympathy Store.
MEMORIAL EVENTS
To offer your sympathy during this difficult time, you can now have memorial trees planted in a National Forest in memory of your loved one.
MAKE A DONATION
MEMORIES & CONDOLENCES
16 Entries 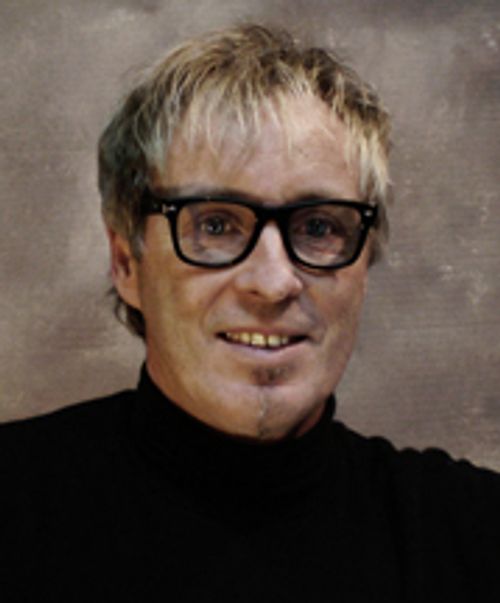 "Faster", is what Richard would say as he passed the design studio. It seems that every 23.5 minutes we would hear him chime out "faster" as he passed by. He was encouraging us to run through the design possibilities 'faster' is hopes of learning more about the problem at hand, or at least stumbling on to a better idea. Long after college, and still to this day, I hear him chime in my head, "faster". Because of Richard, all my friends, employees and co-workers also hear me chime - "faster" - as Richard lives on in all of us.
Mick Hilleary
Student
May 10, 2021
I remember being at a lecture when Richard was describing with a graphic, the curve of increasing knowledge. He thought it was nearly straight up in the 1960s. I wonder how he would characterize it now?
We knew Richard through the UU Church in Oak Park, Illinois. When DPG got started I was also starting my law practice in Oak Park and DPG was a client.
Somehow we ended up with the round maple butcher block conference table and eight elegant chairs from DPG which were delivered to our door in Oak Park. The table followed us through our arrival in New Glarus Wi, center piece of a couple of dining rooms and is now on its way to our son's family in NY. It is an elegant table most suitable for entertaining friends and family. While it may not seem appropriate as a description of the man the table and chairs are as iconic as Richard. We will miss him. How annoying that he seems to have as much hair as i remember from our younger days.
Curious about the location and any written remarks made at the memorial service.

Gof Thomson
[email protected]
608-214-5642
Gof Thomson
Friend
September 6, 2020
Richard Branham made a major impact on me as an undergraduate student at Northern Illinois University. Richard taught there while he worked at Unimark (along with Philip Seefeld, also a designer at Unimark) and Richard inspired me to move forward in my career in biomedical visualization. He was an amazing man and we stayed in touch over the years. We will miss you but your impact lives on.
Scott Barrows
Student
June 10, 2020
Richard quickly became my favorite professor at KU and it was a privilege and a blessing to be able learn from him. His enthusiasm and knowledge were inspiring and his care for us as people was very much felt and appreciated.
Matt Zellmer
March 23, 2020
I first met Richard when I was a scout leader. Always helpful and kind to us new scout leaders. I ran in to him and his wife later at Watkins Museum in the geneology classes they held. His warm sense of humor and smile will be missed. I am deeply sorry for your loss.
Phyllis Stadley
March 19, 2020 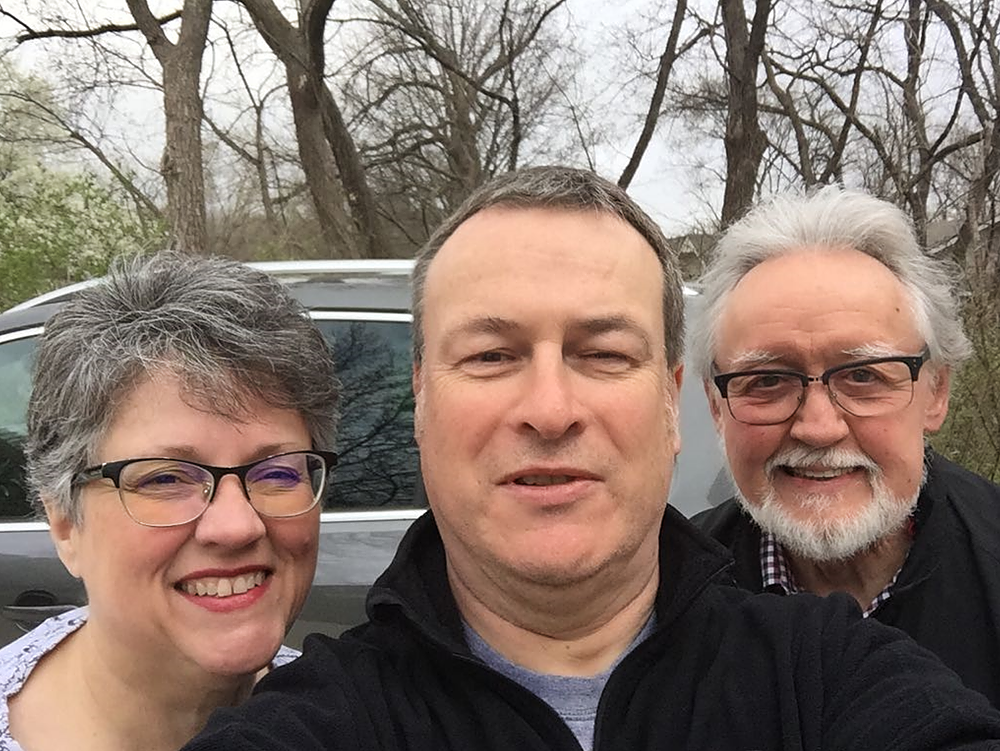 Richard was a true friend, spanning many years and my different roles and visits to KU. Richard and Alisa are the most genuine people I met whilst at KU, and both my wife, Marie and I cherished our meals and dinners out with them - always a pleasure and highlight of the trips. We had so much looked forward to seeing them both in Europe in 2020. Our thoughts are with Alisa in these trying times. Huw and Marie
Huw Thomas
Friend
March 7, 2020
A great mind and inspiration as I started out in my career in Design. Troy Rodman, Former Design Dir. for Kenmore Appliance Brand, Sears
Troy Rodman
Student
March 6, 2020
Richard was a monumental influence during my academic career and a friend throughout my work at KU. Ill always cherish his warm smile, excellent advice, challenging assignments and good bottles of wine.
Julie Loats
Student
February 25, 2020
An impressive professional history & a very gentle, engaging human.
Jim Adams
Friend
February 25, 2020
Richard was a good friend and mentor. I will miss him dearly, as will many others.
Mahbub Rashid
February 24, 2020
First, may I extend my condolences to the family. I am so very sorry for your loss and our hearts go out to all of you. I want you to know that Richard gave me a gift that redefined my entire perspective on everything. At a time when I thought earning a Master's in Interaction Design was so far beyond attainable, it was Richard who asked me, "Why?" A short conversation later, my self-doubts became a self-mantra, Why not? He provided endless opportunities and abundant resources to satisfy insatiable appetites for knowledge. He smashed walls of preconceived notions and opened our minds to a kaleidoscope of creative options, limited only by our imaginations. He wove threads of design thinking into the very fabric of human interaction. By teaching us how to change our lenses of perception, he's planted hundreds of seeds that will inevitably change the world. His gift to me: a proverbial mirror and the belief we can improve what we see. He will always have my eternal gratitude.
Angel Stahl
February 24, 2020
I had the privilege to work with Richard Branham on several projects over the past 5 years or so. He was a remarkable human being in every aspect of his life. If anything, this obituary underplays the role he has played in the lives of so many. I am only one of many who will miss you, Richard. Excelsior!
Neal Kingston
February 23, 2020
I enjoyed and learned much in the genealogy classes. Prayers are with Alisa and family.
Craig Jacob
February 23, 2020
Richard Branham was a teacher in the truest sense of the word! As a former student, I learned quickly that he was not a teller! He would instead teach by leading you in the right direction, and by doing that you really learned it, and not just regurgitate it. A great man who positively touched so many! He will be missed!
Kent Nelson
Student
February 23, 2020
Though I was only in the field of Industrial Design for a few years, the influence of Richard Branham upon my academic and career choices will forever be with me. I always looked forward to taking classes from him and enjoyed listening to his endless stories about his experiences in the field. Richard Branham inspired me and many future designers during his long life.
Dan Matthews
Student
February 23, 2020
Richard was a true Renaissance man with boundless curiosity about, and deep engagement in the world. We have wonderful memories of times spent with Richard--especially of the many conversations we had over the years about design, education, politics, and food. Alisa, our condolences on your loss and our hope that memories of your long and happy marriage are sustaining.
Suzanne, Larry Rice
February 23, 2020
Showing 1 - 16 of 16 results