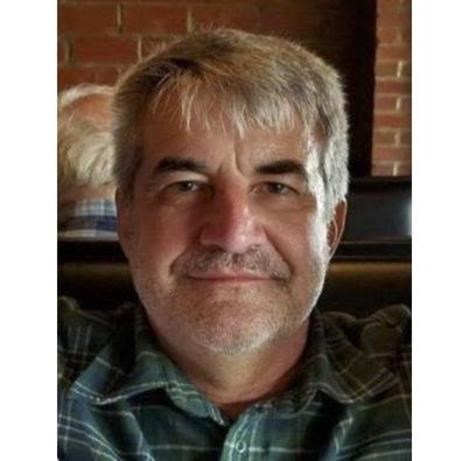 John was born in Ottawa, Kansas, March 20, 1958, to Thomas E. Gleason, Sr. and Carolyn Carey Gleason. He graduated from Ottawa High School in 1976 and attended Baker University and the University of Kansas. He worked in business finance with Douglas Gleason Associates and later in personal finance and sales.

John was an accomplished musician, proficient particularly on trombone, saxophone, guitar and percussion. His musical tastes were broad, including jazz, rock, reggae and blues. He maintained an extensive collection of record albums, encompassing both familiar and obscure artists. In the mid-1980s, John hosted The Jazz Place on KCUR-FM.

As a teenager, John loved and cared for the family Saint Bernard, Barney. Later he was active for many years in animal welfare organizations including Kansas City Great Dane Rescue, transporting numerous dogs to new homes in the area. He adopted a number of Great Danes and other large rescue dogs as his own companions.

Family history was a continuing theme in John's life, as he maintained contact with cousins in the western United States and with his parents' family friends in Ottawa. He continued to communicate with a number of friends from his high school days and enjoyed recounting past activities with his older brother Tom.

John is survived by his brother and sister-in-law Tom Gleason, Jr. and Ann Gardner, and by his nephew Chris Gleason, all of Lawrence. He was preceded in death by his parents.

John's family will meet with friends from 6 to 8 p.m., Tuesday, September 7, at Lamb-Roberts-Price Funeral Home, Ottawa. The family encourages visitors to respect each other's safety through masking and appropriate social distancing. A private family graveside service is planned. The family suggests memorial contributions to an animal welfare organization of the donor's choice, which can be sent c/o Lamb-Roberts-Price Funeral Home, P.O. Box 14, Ottawa, KS 66067. Condolences may be sent to the family through www.lamb-roberts.com.
Published by Lawrence Journal-World on Sep. 2, 2021.
To plant trees in memory, please visit the Sympathy Store.
MEMORIAL EVENTS
Sep
7
Visitation
6:00p.m. - 8:00p.m.
Lamb-Roberts-Price Funeral Home - Ottawa
325 S Hickory St, Ottawa, KS
Funeral services provided by:
Lamb-Roberts-Price Funeral Home - Ottawa
MAKE A DONATION
MEMORIES & CONDOLENCES
5 Entries
John could always bring a smile to our faces. He could always be depended on to have an opinion on anything we might be discussing. But mostly he was just always there when you needed him, never expecting anything in return. I loved when he would show up with one of his horns and play for us. Many years he would be there at Bird´s grave paying his respects. He was a sweet soul, and had that infectious laugh that would make me laugh when he would throw his head back and let it go. We loved him and he is missed every day.
Jeff Harkness
Friend
September 11, 2021
John was a great friend and an incredible musician. He was a brother to me.
Marc Burch
Friend
September 8, 2021
I knew John in college. He was an amazing musician. I am saddened to hear of his passing. He was a good man and will be missed.
Mike Miller
September 3, 2021
I was so sorry to hear of John´s passing. My deepest sympathies to The Gleason family.
Marty Olson
Friend
September 3, 2021
I loved John. I just went to try to find him online and found out about this. It hit me hard. He was so good to me, he was a good friend.
Chad Peterson
Friend
September 3, 2021
Showing 1 - 5 of 5 results