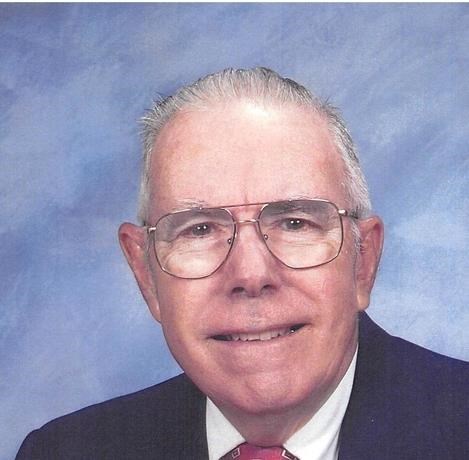 Funeral Services will be held at 11:00 am on Tuesday, June 29th, 2021 at the St. Margaret's Episcopal Church, Lawrence, KS with Fr. Marco Serrano, Rector Officiating. Visitation will be from 10:00 until time of service on Tuesday at the church. Burial will follow at 3:00 pm on Tuesday in the Mt. Vernon Cemetery, Atchison KS. Memorial contributions are suggested to Mt. Vernon Cemetery Association or the St. Margaret's Church and may be sent in care of the Becker-Dyer-Stanton Funeral Home, 800 Kansas Ave, Atchison, KS 66002 who is handling the arrangements. Condolences may be left online at www.beckerdyer.com.

Jim was born on April 30, 1923, in Atchison Kansas the son of James J. and Frances E. (Nicholson) Walsh. He graduated from Atchison High School in 1941 and attended St. Benedicts College for 2 years. He worked in his father's men clothing store in Atchison until 1958 when the store closed with the flood of that year. Jim worked at Squire 606 clothing store until he moved to Lawrence, KS where he managed the S & K Men's Wear store until his retirement. While living in Atchison, Jim was a member of the Trinity Episcopal Church, after moving to Lawrence the St. Margaret's Episcopal Church. He was a member and served on the Board of Directors of the Atchison Area Chamber of Commerce and served as treasurer. He attended all high school and Benedictine college football and basketball games and did sport reporting for the Kansas City Star, St Joseph's Newspress, Topeka Capital, and Wichita Eagle Beacon. He named the Atchison Colts, Atchison's Men's Team in the MO-KAN League. Jim was a member of the Atchison Kiwanis where he served as President, Lt. Governor of Division 1. International Accredited Representative for Kiwanis International, and Kiwanis Community Services Division Director for Kansas. He continued to be active in the Lawrence Kiwanis Club and was recognized as the only 75-year member of Kiwanis in the State of Kansas in 2017.

He is survived by his long-time friend Betty Haley, Lawrence, KS and various cousins and nieces and nephews. His parents and sister, Frances Elizabeth Walsh preceded him in death. A special thank you to his nurturing care giver Cyndi Hurst who made it possible for him to live independent until the end of his life. Jim was a special person with an easy smile, always had a story and a great sense of humor throughout his life.
To plant trees in memory, please visit our Sympathy Store.
Published by Lawrence Journal-World on Jun. 26, 2021.
MEMORIAL EVENTS
Jun
29
Visitation
10:00a.m. - 11:00a.m.
St. Margaret's Episcopal Church
, Lawrence, KS
Jun
29
Funeral service
11:00a.m.
St. Margaret's Episcopal Church
, Lawrence, KS
Jun
29
Burial
3:00p.m.
Mt. Vernon Cemetery
, Atchison , KS
Funeral services provided by:
Becker-Dyer-Stanton Funeral Home
MEMORIES & CONDOLENCES
0 Entries
Be the first to post a memory or condolences.