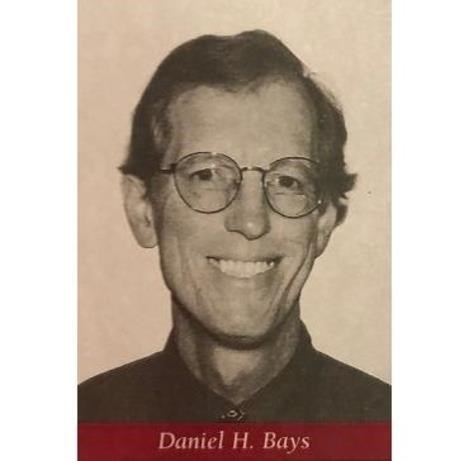 BORN
1942
DIED
2019
FUNERAL HOME
Kutis Funeral Home, Inc, Affton Chapel
10151 Gravois Road
St. Louis, MO
Bays, Daniel Henry of Sunset Hills, Missouri, passed away at the age of 77 after a hard-fought battle with Parkinson's disease. Dan was born in St. Joseph, Michigan in 1942 to parents Henry & Barbara Bays. He graduated valedictorian of St. Joseph High School and attended Stanford University, where he joined the Alpha Tau Omega fraternity and studied in France for a year before receiving his BA in History in 1964. He earned a master's in Far Eastern Studies in 1967 and a PhD in Asian History in 1971, both from the University of Michigan. In 1967, Dan married Janice Gardner, his loving wife of 51 years. Prior to completing his studies, Dan was accepted into the US State Department, though he resigned before accepting his post due to his refusal to publicly defend what he privately abhorred regarding US foreign policy at the time and his desire to become a history professor.

Immediately upon receiving his PhD, Dan took a position teaching in the History Department at the University of Kansas. During his tenure there, he directed the Center for East Asian Studies and was twice elected chair of the History Department. He also spent substantial time overseas, including a National Endowment for the Humanities funded research project for the British Museum in London in 1973, and Fulbright scholarships to Taiwan in 1977 and 1984, as well as various extended teaching trips to China. Dan returned to Michigan in 2000, joining the History Department of Calvin College, where he was bestowed with the prestigious Spoelhof Chair and led the Hubers Asian Studies Program, establishing the Asian studies minor.

Renowned around the world as the preeminent expert on Christianity in China, Dan authored/edited six books and wrote many scholarly articles which were published throughout his career. He also frequently reviewed submissions for respected academic publications, including the Harvard University Press, Yale University Press, and Oxford University Press. He spoke at international academic conferences and has directed major research projects funded by the Henry Luce Foundation and Pew Charitable Trusts.

Dr. Bays was beloved by his students. At Calvin College, he established the Bays-Herzberg China Semester Abroad Scholarship, which is intended to strengthen students' passions for and understanding of Chinese culture and language. Dan was especially fluent in speaking and reading Mandarin Chinese, as well as Japanese and French.

Incredibly devoted to his family, Dan was humble, loving and kind. He turned his life over to the Lord in 1973. He is survived by his beloved wife Janny, his brother Tim (wife Barbara), as well as his daughter Kristen (husband Chris) Hite and son Justin (wife Sarah). He was especially proud of granddaughters, Georgia Hite and Selma Bays. He is also survived by precious friends the Palenskes, the Mawhinneys, the Nykamp family, Steve Zegura, and Art Sciaroni.

Ever faithful to his true love and his God, he did have another love: the game of golf. Dan achieved a seven handicap index while a member of Lawrence Country Club, and could often be seen practicing his swing from his chair in his later days. Importantly, his deep faith did not preclude a cutting wit, nor a fine appreciation for irreverent humor and a good cigar. He was and will always be Very Truly Loved.

Friends and family are welcome to celebrate Dan's life on Sunday May 19 at the Kutis Funeral Home, 10151 Gravois Road, St. Louis, MO. 63123. Visitation to be held at 2 PM with a service to be held at 3 PM.
To plant trees in memory, please visit our Sympathy Store.
Published by Lawrence Journal-World on May 15, 2019.
MEMORIAL EVENTS
May
19
Visitation
2:00p.m. - 3:00p.m.
Kutis Funeral Home, Inc, Affton Chapel
10151 Gravois Road, St. Louis, MO
May
19
Celebration of Life
3:00p.m.
Kutis Funeral Home, Inc, Affton Chapel
10151 Gravois Road, St. Louis, MO
Funeral services provided by:
Kutis Funeral Home, Inc, Affton Chapel
MEMORIES & CONDOLENCES
14 Entries
Jan, Kristen, and Justin
So sorry to learn of Dan's passing. 29th Court was best neighborhood we ever lived in and your family was a very important part of that. Also sorry it has taken me so long to get this off to you.
Larry Bakerink
June 4, 2019
Dear Jan and family:
Weeks have now passed since Dan has gone to his heavenly reward, but after the promptings of one of our own family members who took one class with Dan at Calvin College, and who linked us up to the published obituary, my wife and I would add just a few words of gratitude and admiration for both Dan and Jan.
We spent our professional career in Hong Kong, and so we generally only met Dan in person at some conferences where our shared interest in Christianity in China brought us together. Dan's stature as a creative and bold historian of many facets of Christianity, including what were a good number of often overlooked sectarian groups, was undeniable, he being a standard scholarly warrior in the field.
Once during our thirty years in Hong Kong we had the privilege to visit Grand Rapids and so could meet at Calvin College. It was a time that was precious for us because of the extremely generous hospitality of the Bays family, the joys and depths we shared in our Christian faith, and the shock at realizing that Dan was suffering from Parkinson's disease. It still amazes us that he endured with such scholarly fruitfulness for many years after that visit, and Jan was regularly his gracious support. What strength you both showed through the gauntlet of that harrowing disease!
May the Sovereign Lord Who gave you both such strength now also be the Fountain of Life and Hope during this time of Dan's absence, granting to you, Jan, and your family, the grace to grieve in Dan's absence, and the abiding love of our Trinitarian Majesty to continue to be fruitful in the remaining time granted to you all for the sake of Christ's glory!


Lauren and Mirasy Pfister
June 3, 2019
Dearest Jan, Justin, and Kristin. My deepest sympathies and prayers are with you all at this time. I have such wonderful memories of your family and time spent at the Bays family home. He was such a warm and caring man and loving father and husband. What an honor it was to have known him. God be with you all and may his love surround you. All my love. Sincerely, Amanda Willems Hoffman.
Amanda Willems
May 25, 2019
Dear Jan and Family,
I surprised and saddened to read of Dan's passing. His intelligence, compassion and integrity made a difference in many lives, including my own. Knowing of his work at KU and reading his obituary, I am impressed at what a good man he was and what a good life he led. --Elaine Gerbert, Lawrence
May 21, 2019
I'm sorry to hear about Dan's passing, but I know that those who love him do not grieve as those without hope, so my sorrow is leavened because of that. I knew Dan fairly well during his time at Calvin, writing about him in my capacity as media relations director and also taking his class on the history of the Korean War, a fascinating class that still informs my understanding of North and South Korea to this day. He was a smart, but incredibly self-effacing guy, and he will be missed. Grace and peace,

Phil
Phil de Haan
May 21, 2019
Dear Jan and family, I am so sorry to hear of the passing on of Dan. It's been many years since I have seen him, but I have thought of him several times when I was traveling to China. I always appreciated his sincerity and friendship
Wayne McDaniel
May 19, 2019
Dear Family of Dr. Bays,

In 1973 or so, I took a survey Asian history course from Dr. Bays and another professor.. He remains one of my favorite teachers for his knowledge, enthusiasm, ability to convey concepts and his kindness. He struck me as a gentle man, with true mettle.

Susan Stahl Lawrence, Kansas
May 18, 2019
Jan and family, my condolences on the loss of your dear husband and father. May you find comfort in your memories and know that many friends, far and near, are thinking of you.
Judy Hathaway
May 16, 2019
Dr. Bays was one of the gentlest and kindest men I had the honor to know. He was always there with a gentle, low laugh and silly sense of humor. I have many wonderful memories of Dr. Bays from growing up with Kristen. Our thoughts and prayers are with you all during time.
Anne Broz
May 16, 2019
This news is sad, but in another sense very good, because he lived to see the face of Christ. Remembering Dan with affection for the gifts he brought to us at Good Shepherd Lutheran. My best memory was when I was told I needed someone "outside the department" to be on my thesis committee (counseling). I selected Dan, because, as expected, his presence gave me a sense of calm. I remember writing in my acknowledgement, "Thank you for loving Jan"--because he knew what was most important in life and lived it out for 51 years. And thank you, Jan for sharing the journey with him--until death. Praying for you.
Verna Froese
May 15, 2019
Dan was a wonderful neighbor and colleague at KU. I have many fond memories of Dan. He will be deeply missed by all in our family.
Doug Houston
May 15, 2019
Dan always impressed me with his intelligence, his caring, and his faith. He was a patient, kind man, a great neighbor, and I know how much he will be so missed by Jan, Kristen, Justin, and so many others. I hope he looks down on all of us and continues to share his grace.
May 15, 2019