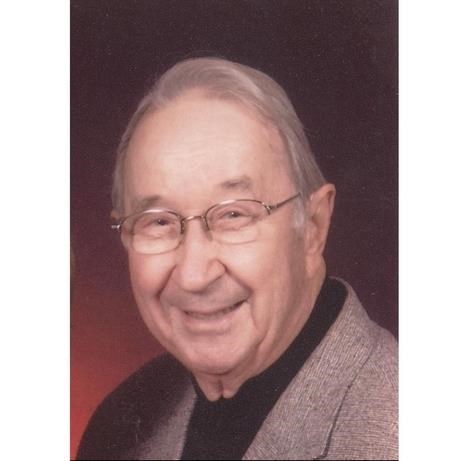 Bruce was born in Ottawa, Illinois on December 3, 1923 to Harold and Ina Linton, and grew up in nearby Marseilles with younger brother, Don. They, and his wife, "Chris", preceded him in death. He is survived by children Marc (Donna) and Wendy (Jeff), grandchildren Andrew, Dean, Jessica and John, and great granddaughters Madelyn and Ella.

Bruce attended Muskingum College (Ohio) where he met his future bride, Marion ("Chris") Christman, but had his education interrupted by service in the Army in WWII. He faced combat in Europe, was injured (Purple Heart) and finished his "points" in an Army "swing band". Returning from war, he married Chris on February 14th, 1946 (at her death, they were one month shy of a 75th anniversary), and finished his undergraduate degree.

After receiving his MA and PhD from Northwestern University, he established the Radio, TV, Film department at the University of Nebraska Omaha, then five years later did the same at KU in 1955, serving as department chair for 29 of his 33 years there. His research interest was self-regulation in broadcasting, and his teaching responsibilities were mostly in TV and film production to graduate students, with many of whom he retained life-long friendships. He served the Broadcast Education Association as president and international representative, and was in advisory roles at KU and elsewhere. He received accolades at KU, Kansas, and national levels.

Bruce loved action: gardening, home improvements, making home movies, playing tennis, golf, and handball, entertainment from family, music, theater, and reading. The Linton's joined Plymouth Congregational Church in 1956, where Bruce sang in the choir for six decades, and from which the family acquired many life-long friendships.

Family highlights included canoe and camping trips. In retirement, Bruce and Chris spent parts of many summers in Estes Park and winters in South Padre Island, jazz cruises, travel within the US and to numerous countries, particularly the UK. They were active with the KU Retirees Endacott Society and had a full social and family calendar.

Bruce will be generally missed as a happy, social, "really nice guy", and intimately missed for his unconditional love, tolerance, and family devotion, and as a role model of integrity, hard work, and a life fully lived.

Memorial contributions may be made in Bruce's name to Plymouth Congregational Church or Endacott Society of the KU Alumni Association and may be sent in care of Warren-McElwain Mortuary, 120 W. 13th Street, Lawrence, KS 66044.

Published by Lawrence Journal-World on Aug. 1, 2021.
To plant trees in memory, please visit the Sympathy Store.
MEMORIAL EVENTS
Aug
21
Memorial service
10:00a.m.
Warren-McElwain Mortuary Lawrence Chapel
120 West 13th, Lawrence, KS
Funeral services provided by:
Warren-McElwain Mortuary Lawrence Chapel
MAKE A DONATION
MEMORIES & CONDOLENCES
3 Entries
I am so sorry about Bruce. My Dad, Tom was good friends with Bruce and thought a great deal of him. My thoughts and prayers are with Bruce's family and friends during this very difficult time.
Nancy Hedrick
August 27, 2021
Bruce and his wife, Chris, were always very kind to me and happy to strike up a conversation when I had the pleasure of working Endacott Society events at the KU Alumni Center. My deepest condolences
John Watson
August 1, 2021
Bruce taught a KU class in film editing in the early 70's which I enjoyed very much. He was a great educator and a nice man that will not be forgotten!
Rex Burkhardt
School
August 1, 2021
Showing 1 - 3 of 3 results