Brian VanSchmus
1964 - 2021
BORN
1964
DIED
2021
Brian Robert Van Schmus, age 56, passed away peacefully in the presence of his wife and sons, on Friday, January 22, 2021. Brian lived graciously and courageously, before dying of the disease of stomach cancer.

Brian was born August 12, 1964 to William Randall and Edna (Evison) Van Schmus in Pasadena, California. Brian lived most of his life in Lawrence, Kansas, attending Broken Arrow Elementary, South Jr High, and Lawrence High Schools, graduating in 1982. He attended Kansas University, where he was a member of the KU marching band and Acacia Fraternity; he graduated in 1986 with a BA in Political Science.

While attending KU, Brian met the love of his life, Nina Sibley. The two married at Trinity Episcopal Church in Lawrence, KS on August 10, 1991. Soon their family expanded as they welcomed sons, Anthony and Devin. Brian relished the role of father and was tremendously proud of his boys. A parade of cats, dogs, hamsters, a horse, guinea pigs, fish and a rabbit made their home complete.

One of Brian's many superpowers was the ability to quote movie lines on the spot. He especially liked the classics such as The Blues Brothers, Monty Python, and The Great Escape. He took "Dad jokes" to a new level. His knowing smile and the twinkle in his eye were infectious and invoked many an eye roll.

Brian was a supporter of Liverpool Football Club (his mother's birthplace), the Kansas City Chiefs, and of course the Jayhawks. March Madness was his favorite season and remarkably his television always remained intact.

While Brian had many interests and hobbies, his involvement with the Boy Scout Troop 53 was very meaningful. He began his scout journey in Cub Scouts and worked his way up to Eagle Scout The troop made its initial trip to Philmont in 1982 with his dad as Scout Master, a trek that he would make again as Troop Leader with his own sons and then with a group of fellow leaders. He enjoyed the Boundary Waters and many other scout adventures. He was a Keeper of the Fire for the Order of the Arrow. Brian was among the 2% of members called to the Vigil Honor in the Order of the Arrow in 2017.

A memorial service will be planned for later in 2021.

Brian always joked that when he died, he wanted to come back as a well-loved house cat; therefore, we ask that next time you see a kitty, give it a little extra love in his memory.

Memorial contributions may be made to Emprise Bank in Brian's name to support camping scholarships for BSA Troop 53, Lawrence KS.
Published by Lawrence Journal-World on Jan. 29, 2021.
To plant trees in memory, please visit the Sympathy Store.
MEMORIAL EVENTS
To offer your sympathy during this difficult time, you can now have memorial trees planted in a National Forest in memory of your loved one.
MAKE A DONATION
MEMORIES & CONDOLENCES
10 Entries
Nina,

My thoughts and prayers are with you during this very difficult time. May your memories together bring you comfort and peace. 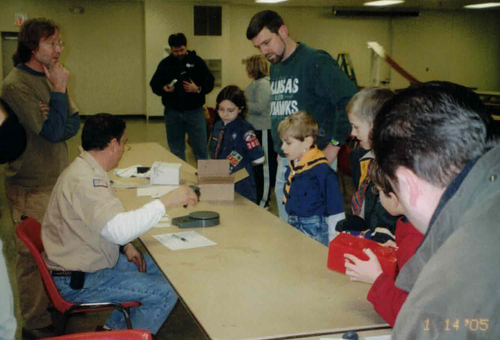 Brian helped me tremendously through our kid's early years with Cub Scouts. I would not have been able to keep the pack running without his support and reliability. Through the years, we saw each other less as our kids entered middle school and joined different troops in town. Every so often we would see each other at a district Jamboree or in the hallways at LHS during parent conferences. Regardless, of our growing infrequent run-ins, he always greeted me with a genuine smile. I am sorry to learn of his death, and comforted that he was not alone at the end. ♪♪ To be an old Goat is relatively easy. Dress in green and act real cheesy♪♪

This photo is from cub scouts. Pinewood derby: Monty and Ian Shnuck(probably the year Ian won the best design with an awesome rabbit car), Rick Bellinger checking in pinewood derby cars, Brian and Devin probably a little nervous about their car being overweight, Mathew Hunt, probably Kevin and James Fredrickson.
Joe stellwagon
Friend
February 2, 2021
The Brian I knew was such a gentle soul and best friend to his wonderful wife!
Andrea Heffernan
Friend
February 2, 2021
My heart goes out to all of the Van Schmus family. So hard to believe this very sad news.
Sending prayers. So sorry for your loss.
Marcia West
Friend
January 29, 2021
I remember Brian laughing. He always found something to chuckle about, and gladly shared stories of his own goofiness if it would make the room guffaw! He also balanced Nina, and adored her. You could see it in his eyes, his deep love for his family.
Karen Hough Majidzadeh
Friend
January 29, 2021
Brian will be missed by all who were lucky enough to know him. We hear his laugh whenever we think of him. He was an important part of our family. Love, hugs and prayers to Nina, Anthony and Devin.
Uncle Mike and Aunt Carol
Family
January 29, 2021
We are so sorry to hear about Brian. Praying for you all. May God bless you and your family with joyful memories and unexpected blessings that give you hope and peace.
Jon & Elyce Leines
Friend
January 29, 2021
Beautiful and heartfelt words. Brian will always be loved and missed. We will cherish memories of him and keep him in our hearts.
Gina
Family
January 29, 2021
Brian was a Beautiful Light and example to all generations. He leaves behind a tremendous legacy of love and positive energy!! He will live well in all of our hearts!!
Carol Swift
Friend
January 29, 2021
Beautiful tribute. Brian was truly a special person who created fantastic memories for so many, especially with the gift of scouting. Heartfelt condolences.
Kristin Eldridge
Friend
January 29, 2021
Showing 1 - 10 of 10 results